Muhammad: A Prophet for Our Time
Karen Armstrong 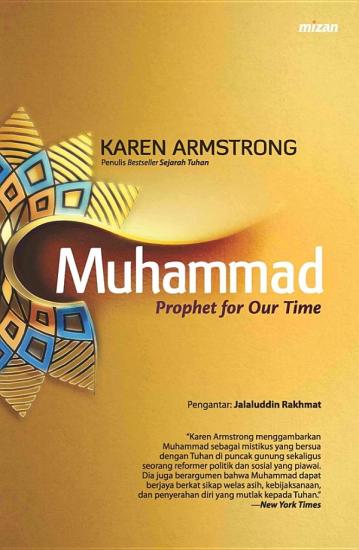 Series: Book 1 in the Agama series

Sigit Purwadi's Library - The Man Who Inspired the World's Fastest-Growing Religion Muhammad presents a fascinating portrait of the founder of a religion that continues to change the course of world history. Muhammad's story is more relevant than ever because it offers crucial insight into the true origins of an increasingly radicalized Islam. Countering those who dismiss Islam as fanatical and violent, Armstrong offers a clear, accessible, and balanced portrait of the central figure of one of the world's great religions.**

Muhammad was born in 570 CE, and over the following sixty years built a thriving spiritual community, laying the foundations of a religion that changed the course of world history. There is more historical data on his life than on that of the founder of any other major faith, and yet his story is little known. Karen Armstrong's immaculately researched new biography of Muhammad will enable readers to understand the true origins and spirituality of a faith that is all too often misrepresented as cruel, intolerant, and inherently violent. An acclaimed authority on religious and spiritual issues, Armstrong offers a balanced, in-depth portrait, revealing the man at the heart of Islam by dismantling centuries of misconceptions. Armstrong demonstrates that Muhammad's life—a pivot point in history—has genuine relevance to the global crises we face today. Discover More Eminent Lives

Francis Crick: Discoverer of the Genetic Code by Matt Ridley |
Freud: Inventor of the Modern Mind by Peter Kramer |
Machiavelli: Philosopher of Power by Ross King
---|---|---

Armstrong's second biography of Islam's prophet is lucid and stylish, never condescending. It puts the best face possible on its subject. The Muhammad it projects gave his followers "a mission: to create a just and decent society, in which all members were treated with respect." Moreover, Armstrong's Muhammad behaved justly and decently while he lived, though perhaps a bit according to the stringent standards of Arab culture at the time. He taught tolerance toward Jews and Christians. Never mind--Armstrong doesn't--about denials of civil equality to non-Muslims and fulminations about them as "infidels." The Jewish clan whose men were exterminated after a particular battle? It wasn't that they were Jews but that they were traitors, and it wasn't Muhammad who decided they should be executed. The fact that, after declaring that Muslim men could have no more than four wives, Muhammad himself exceeded the limit? Hey, a leader has to make alliances with other groups. A nicely written book, but don't let it be the only biography of Muhammad you read. Ray Olson
Copyright © American Library Association. All rights reserved